Where does he go,
The daring one?
He follows the road
That leads to the sun.
Is the going rough
The highway wide?
The road is long--
But so is his stride!
And does he guess
What lies ahead?
He only knows
That he is led . . .
Drawn by a will
Greater than his
To look for the sun
And a Power that is.
--Clare Harner.

Dianne Scott tells the story of How Bow Channel Got Its Name.

People pass with averted eyes--
For I'm the sort their creeds despise.
No one believes I'd send you away.
Everyone thinks I begged you to stay.
The nicest women pass me by.
With questioning brows they wonder, "Why?"
They hold their skirts aside with care
Though the walk is broad with room to spare.
For a lady must wear a wedding ring:
A woman who can't is a leprous thing!
Why did you leave me alone like this?
An outcast because I loved your kiss.
CLARE HARNER.

Email ThisBlogThis!Share to TwitterShare to FacebookShare to Pinterest
Labels: Eros, Lucia Trent, Poems by Clare Harner, With No Ring

"... a reporter who was tough as nails and could spit the same."
-- George Elliston as described by Kevin Grace in Cincinnati's Literary Heritage (History Press, 2021) 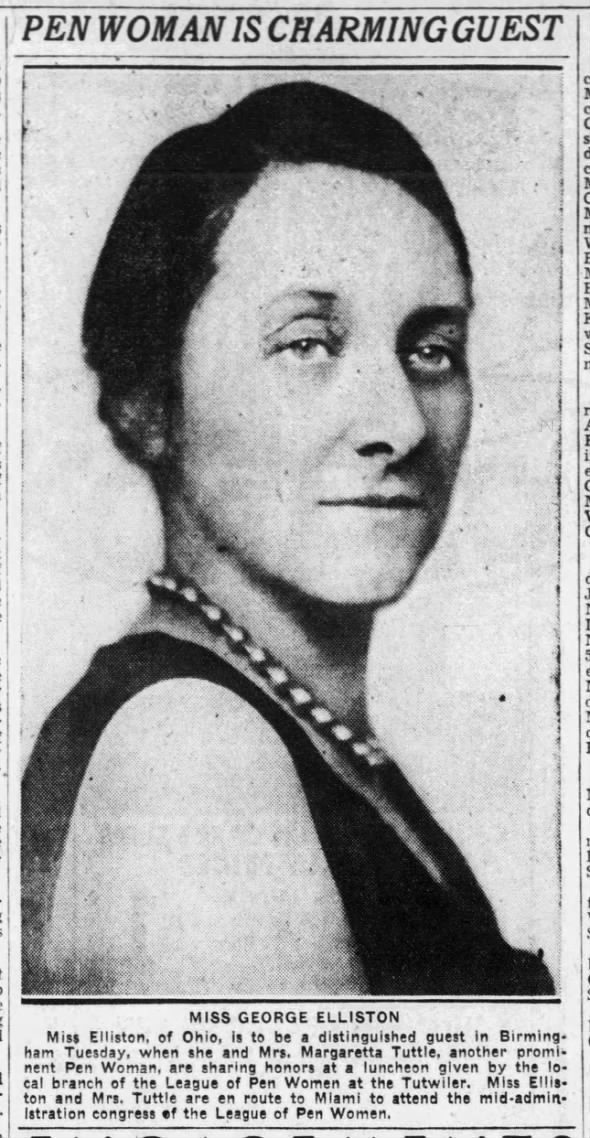 Sun, Mar 24, 1935 – 24 · The Birmingham News (Birmingham, Alabama) · Newspapers.com
George Elliston (1883-1946) founded and edited The Gypsy all poetry magazine in Cincinnati, Ohio. Elliston's Gypsy published two poems by Kansas native Clare Harner, "Immortality" (December 1934) and Where You Go (June 1936). Clare Harner's Immortality is nowadays more popularly known by its first line "Do not stand by my grave and weep" or "Do not stand at my grave and weep."
From the Birmingham AL News, March 24, 1935:

... George Elliston, an Ohio newspaper woman and poet with a delightful personality, will speak on poetry and read some of her poems. Miss Elliston has gained wide recognition for her poetry and through her newspaper work. Her poems have been printed in worthwhile anthologies, reprinted in the Literary Digest, set to music, used over radio, chosen for illumined motto cards, reproduced on “movie” screens and translated into Russian and German. In the Spring of 1928 she won in Vienna, with Ilse Huebner, a prize much coveted since the time of Bach by poets and composers, the Oesterreichische Music Pad Reichsverband award.
She is owner and editor of the poetry journal Gypsy, which rates as one of the best poetry magazines on the market. She has a number of books of poetry to her credit and, in spite of her work as a poet and editor, she finds time to be a member of the news staff of The Cincinnati Times-Star. She writes news and features and is a syndicate writer for numerous papers.

Miss Elliston is past chairman of poetry for the League of American Pen Women and her many other activities are to be found in “Who’s Who in America.” During the Summer months Miss Elliston forgets all of these activities and retires to her estate of 15 acres, in the midst of which “Catalpa Cabin,” nestles, named for the huge catalpa which umbrellas it, and here in her studio, “Rhyme Hole,” she writes most of the lovely, haunting lyrics that have made her so well known....

Link to George Elliston bio in The Encyclopedia of Northern Kentucky:

Email ThisBlogThis!Share to TwitterShare to FacebookShare to Pinterest
Labels: Cincinnati, Clare Harner, Do not stand at my grave and weep, George Elliston, Immortality, The Gypsy

Email ThisBlogThis!Share to TwitterShare to FacebookShare to Pinterest
Labels: Clare Harner, Do not stand at my grave and weep, Immortality, Mary Elizabeth Frye

In this 1988 letter to the editor of the Escondido CA Times-Advocate, Margaret Ireland correctly identified Clare Harner Lyon as the author of the popular bereavement poem "Do not stand at my grave and weep." Among other changes in the version quoted by Ms. Ireland, "uplifting" replaces "up-flinging"; and the line "I am the soft stars that shine at night" replaces "I am the day transcending night" in the original 1934 text of Clare Harner's Immortality.

Poem to ease the pain

This is an attempt to ease the pain, if only in a small way, of the families of those who lost their lives in the recent plane crash. Since the victims no longer can feel pain, the ones who grieve are the ones who are left behind and suffer a loss. This poem, by Clare Harner Lyon, is well known and has been quoted in various publications for more than 30 years and was recited as a eulogy at the burial of movie star John Wayne.

"Do not stand at my grave and weep;

I am a thousand winds that blow.

I am the diamond glints on snow.

I am the sunlight on ripened grain.

I am the gentle autumn's rain.

When you awaken in the morning's hush,

I am the swift uplifting rush

of quiet birds in circled flight.

I am the soft stars that shine at night.

Do not stand at my grave and cry;

It is in nature's pattern that we live a certain number of years and if we make use of every moment to be the best of whatever we choose to be, then there should be no fear of the unknown of what follows when life is over. 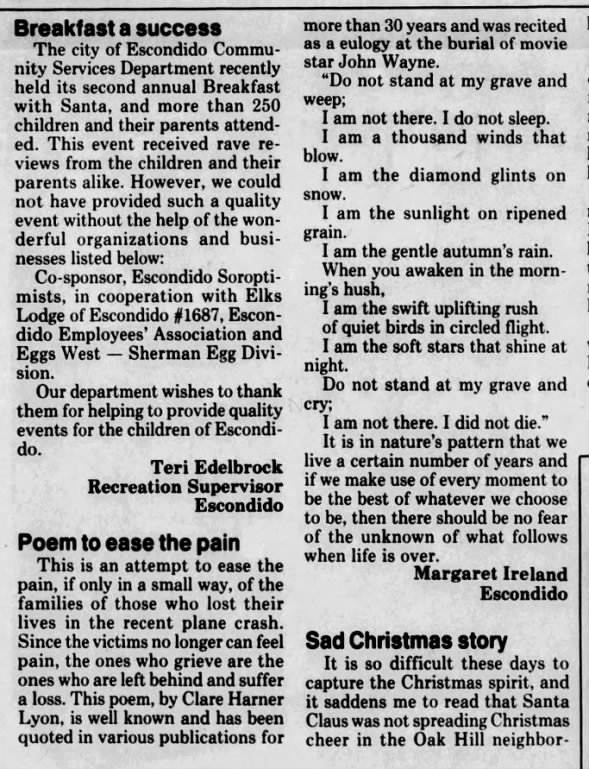 Thu, Dec 29, 1988 – 19 · Times-Advocate (Escondido, California) · Newspapers.com
As shown below, in December 1977 the supposedly "anonymous poem" was read by John Wayne at the funeral of film director Howard Hawks. 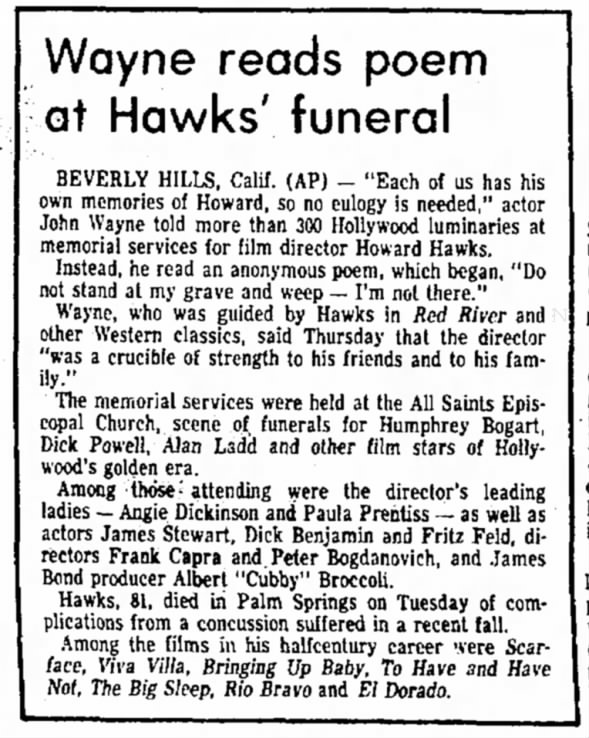 Email ThisBlogThis!Share to TwitterShare to FacebookShare to Pinterest
Labels: authorship, Clare Harner Lyon, Do not stand at my grave and weep, Escondido Times-Advocate, John Wayne

We printed the poem last September, but as word got around about this inspiring eulogy we've received many more requests and are happy to repeat it:

"Do not stand at my grave and weep;

I am not there. I do not sleep.

I am a thousand winds that blow.

I am the diamond glints on snow.

I am the sunlight on ripened grain.

I am the gentle autumn's rain.

When you awaken in the morning's hush,

I am the swift uplifting rush

of quiet birds in circled flight.

I am the soft stars that shine at night.

Do not stand at my grave and cry:

The poet is Clare Harner Lyon. John Carpenter, who co-wrote the TV script of the 1979 TV movie, reports that he heard it in 1977, when it was delivered by the late John Wayne as the eulogy at the funeral of director Howard Hawks.  --Paul Henniger

The poem known as "Do not stand at my grave and weep" was first printed under the title "Immortality" in a Cincinnati poetry magazine called The Gypsy, as shown in my 2018 article Clare Harner's 'Immortality' (1934). The tenth line as reprinted in the San Francisco Examiner on June 13, 1982 reads

"I am the soft stars that shine at night."

"I am the day transcending night."

in the text as originally published December 1934 in The Gypsy  It seems that the later revision to "I am the soft stars that shine at night" may have been made by the author herself--possibly after her marriage to David Haines Lyon around 1944, which would explain Henniger's use of Clare Harner's married name, Clare Harner Lyon.

In March 1980 and November 1981 Henniger had reprinted the poem without attribution.

"The identity of the poet is unknown, according to NBC. The writer of the teleplay, John Carpenter, reports that he heard it in 1977 when it was delivered by the late John Wayne at the funeral of film director Howard Hawks."

Sometime during the next six months Henniger must have learned that San Francisco resident Clare Harner Lyon wrote the poem. One year later, rival TV columnist Richard K. Shull launched the dubious and unverifiable claim for Mrs. Mary E. Frye of Baltimore as the admirably unpretentious author of "Do not stand at my grave and weep." Shull's appealing 1983 tale was influentially amplified by Kelly Ryan in a dramatic episode of the Canadian radio program "Ideas" titled A Poetic Journey, first broadcast on CBC in May 2000.

Paul Henniger, 78, former television writer for Los Angeles Times Syndicate and The Times. Born in San Francisco, Henniger moved to Los Angeles in 1946. He worked for The Times’ sister paper The Mirror from 1948 until it folded in 1961 and then for The Times in its television news section until his retirement in 1994. For many years, Henniger helped create the newspaper’s logs of television listings and wrote a weekly column about sport programs on television. Throughout his career, Henniger also wrote a television column and numerous features for the Times syndicate, which marketed the articles to newspapers throughout the country. On May 9 in Encino of pneumonia.

Melvilliana: Not Mary Elizabeth Frye
at June 25, 2020 No comments: